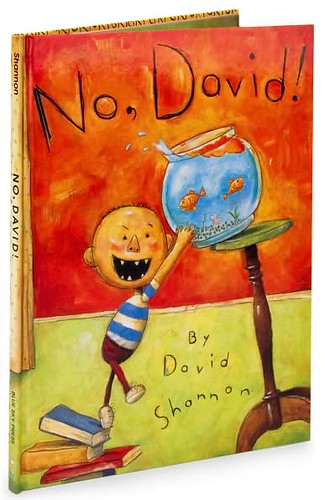 Who doesn't get tired of all the well behaved kids in books? – Sharon Falduto

David, oh David. He could have split his own vote, you know. With sequels David Goes to School and David Gets in Trouble out there, Davy could easily have caused readers to pick and choose amongst his various low-key and exceedingly naughty adventures. With the exception of a single voter, however, everyone loved David's original story the most. And, as one voter mentioned to me, kids adore David . . . particularly when he's running buck naked down the street.

A description from the Kirkus review: "This autobiographical (according to the author's note) story from Shannon (A Bad Case of Stripes) features a young hellion, also named David, who is forever at the receiving end of a sharp 'No!' Among his prime escapades: overreaching for the cookie jar, excavating his nose, tracking mud on the carpet, pounding pots, playing with food, making a naked escape from the house. 'That's enough,' his mother shouts, and other familiar adult admonishments show up as well: be quiet, come back here, go to your room, settle down, stop that this instant, not in the house. This last comes as David prepares for a little indoor hardball. Does he listen? Does he break a vase? Does he get sent to the corner, nose to the wall? Readers or listeners will be gripped by this episode right out of their own lives, through to the stray tear, the look of contrition, and the moment of redemption."

I met David Shannon once, and a nicer guy you couldn't find. So the idea that this David is in any way, shape, or form related to THAT David is baffling to me. I mean talk about a soft-spoken, infinitely sweet feller. I mean maybe he likes to make Kick Me signs and surreptitiously place them on the backs of his fellow authors, but somehow I doubt it.

The strange thing about the David books for me is that they don't bug me. I know that sounds kind of crass, but if you were to describe the David series to me without my having seen it, I would assume that it wouldn't be the kind of thing I was into. This, as we see, is not the case. I'm a David fan, no question. I like both him and his sequels. Now I'm just waiting for the Duck on a Bike sequel.

Publishers Weekly said of it, "Readers won't be able to resist taking a walk on the wild side with this little rascal, and may only secretly acknowledge how much of him they recognize in themselves."

School Library Journal added, "This book is perfect for reading aloud. Children will relish the deliciously bad behavior and the warm and cuddly conclusion."

The New York Times Book Review section put in, "...[A] hilarious compilation of toddlers’ wrongdoings….Parents might weary of the chastising tone….Children…will recognize immediately that they have found a kindred spirit."

And Kirkus put in its two cents with, "David is a small, snaggle-toothed piehead whose mischief—for those who don’t have to clean up after him—is nothing short of exhilarating."

Reading that Kirkus review makes me wish that I had been the first person to call David snaggle-toothed. So perfect. 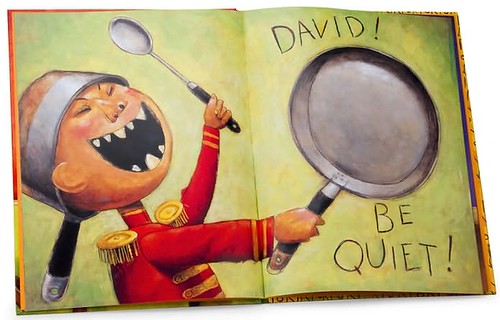 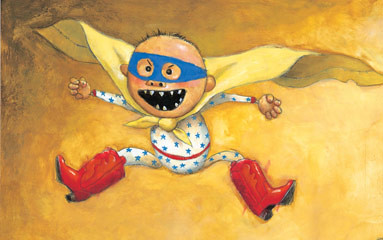 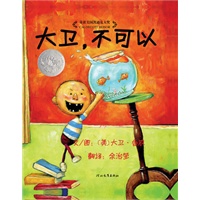 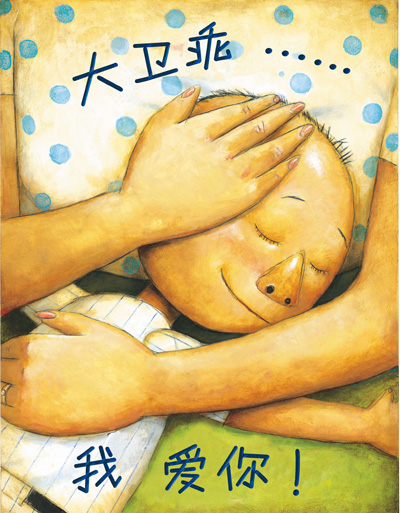 #33: Cloudy with a Chance of Meatballs by Judi Barrett, illustrated by Ron Barrett (1978) 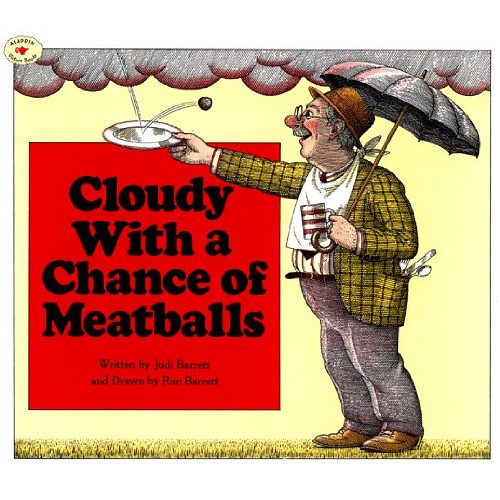 I cannot tell you how incredibly excited I was to hear a movie is being made out of this book. I have read it so many times I have it memorized and am always so disappointed to learn that a library doesn't have it on its shelves. How can you not love a story about food taking over a city?! I am always recommending this and buying it for people and so many have never even heard of it. I'm a fan, a big one. – Amanda Snow

Aside from The Giant Jam Sandwich there's really only one other iconic gigantic food book that comes immediately to mind. I rediscovered this book in my old age, and was delighted to find that it really does stand up to scrutiny. Sadly, I found that it is not the best readaloud for large groups, but in spite of that it's a fine tale of the best and worst aspects of sky-related foodstuffs.

The publisher description of the plot reads, "The tiny town of Chewandswallow was very much like any other tiny town except for its weather which came three times a day, at breakfast, lunch and dinner. But it never rained rain and it never snowed snow and it never blew just wind. It rained things like soup and juice. It snowed things like mashed potatoes. And sometimes the wind blew in storms of hamburgers. Life for the townspeople was delicious until the weather took a turn for the worse. The food got larger and larger and so did the portions. Chewandswallow was plagues by damaging floods and storms of huge food. The town was a mess and the people feared for their lives. Something had to be done, and in a hurry."

Think it's all fun and games? Think again. Bottom Shelf Books revealed what is undoubtedly the strangest picture in the book. One that I'm pretty sure most of us have missed for years. Mind you, there's a perfectly reasonable explanation for it.

Of course Cloudy was not without its sequel. I don't know many people who would claim to know Pickles to Pittsburgh particularly well. Except possibly the Pittsburgh librarians out there. So let's hear it, Pittsburghians. Do you know this book? Do you read it regularly? Cause as far as I can determine it is the ONLY picture book out there with the word "Pittsburgh" loud and proud on its cover (please prove me wrong, somebody).

Now in its 27th year the book is being turned into a major motion picture. And while you may disagree with the liberties taken with the plot, you can't deny that this trailer certainly taps into the human desire for building-tall jello. 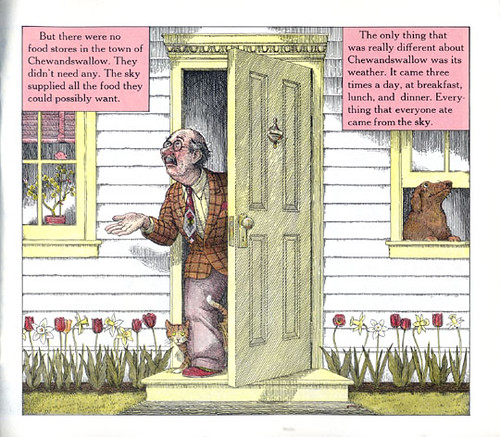 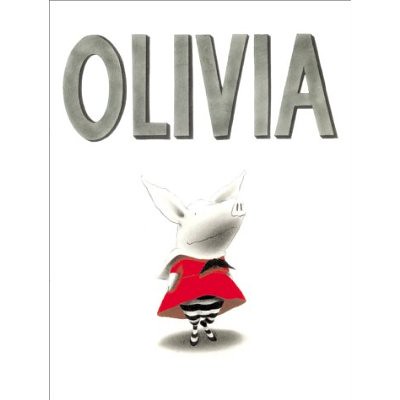 The pictures work as hard, if not harder than, the text in the Olivia books. Ian Falconer perfectly captures the precocious self-possession of a certain sort of child, and there are plenty of nods to the adult readers in the house. – Stephany Aulenback


From a boy with an extraordinarily long name to the world’s most famous female pig one-namer (Babe and Wilbur being male). For a second there it looked as if Olivia would be paired directly next to Eloise in this list, and I wasn’t certain if the world was ready for that level of female precocity (new word). Now we’ll never know, since Olivia catapulted herself even higher on the strength of her merits (and sequels) alone.

The plot from the publisher reads, "Olivia is a spunky little pig with an abundance of energy and enthusiasm. Her daily activities — singing the loudest of songs, creating art on walls, and building skyscrapers — do not tire her in the least. Rather, when it is time for bed, she asks for a plethora of books to be read! Olivia’s mom, on the other hand, is drained."

It seems a bit unfair to consider that this was Falconer’s first picture book. I suppose that’s sort of the dream. You write a picture book and BOOM! Instant classic. Whatchagonnado? Like fellow Top 100 Picture Book Poll members Harry Bliss and William Joyce, Falconer is a New Yorker cover artist as well.

I was most fascinated, when reading through various professional reviews of this book, to read this line from Kirkus, "Although the most visual weight is given to Olivia, just waiting on the sidelines is Olivia’s little brother Ian. New fans of Falconer can only hope Ian will soon star in his own book." Nine years later we’re still waiting.

The single best blog post I have ever read that was Olivia related? This one right here. It made my week.

You can read the full book here. And, never to be outdone by Eloise, she has her own website too. And yes, she also got a pretty pretty postage stamp.

Publishers Weekly said of her, "Come one, come all for this extraordinary debut for both Falconer and his unforgettable porcine heroine. Falconer’s choice to suggest Olivia with a minimum of details and a masterful black line allows readers to really identify with her-no doubt, they will. There’s a little bit of Olivia in everyone."

The Christian Science Monistor said, "Not only is this one terrific picture book, but it’s Falconer’s first…Illustrations are stunning, done in stark black and white with splashes of true red. Together, the words and pictures evoke smiles, giggles, and a rare but thrilling sense that this book may be absolutely perfect."

Time said, "Falconer, whose work has appeared on New Yorker covers, has given her [Olivia] so much porcine panache that she would win over even the strictest parent. Most of the time."

And Kirkus finished with, "Rarely have readers seen a pig with such joie de vivre and panache." 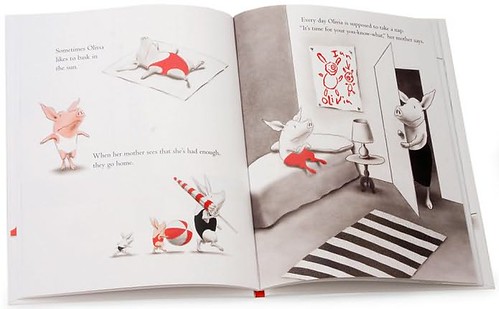 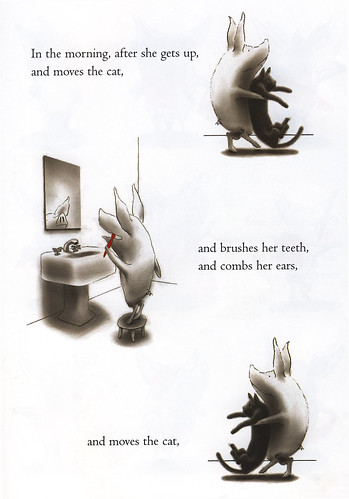 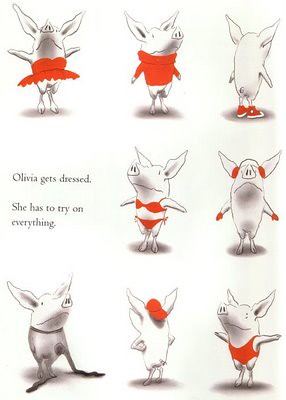